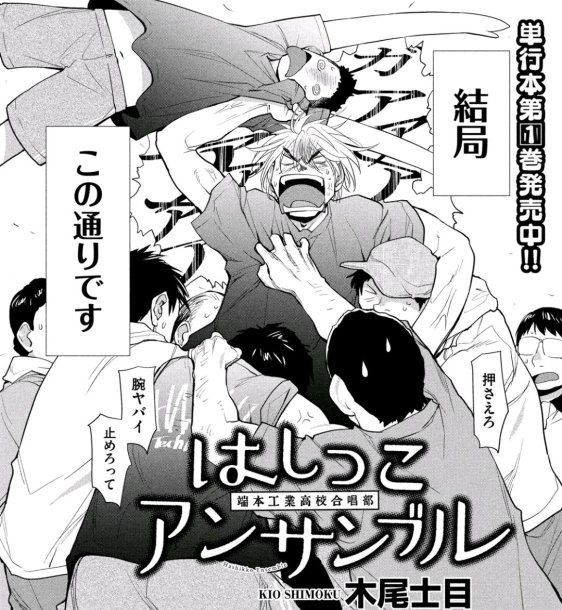 Orihara’s hard to understand, but it might not be for the reasons anyone assumed.

It’s the Sports Festival at Hashimoto Technical High School, but the biggest spectacle isn’t any event—it’s Orihara on a rampage. Another classmate has played a prank on him by messing with his music player, so Orihara responds by going berserk and tossing him around like a ragdoll. Jin and the others suspect that the only thing that can calm him down is his music and his noise-canceling earphones, but (as revealed in a flashback), they’ve been having trouble fixing the earphones, even with Himari’s help. However, Himari reveals that she’s spent extra time to repair them. In a mad dash, the Chorus Club and the Rugby Club work together to successfully subdue Orihara.

They Laughed, They Cried

This chapter kind of reminds me of the infamous soccer episode of the anime Eureka Seven, which contained, in the same episode, both athletic filler hijinks and a plot-crucial coup d’etat. The situation in Hashikko Ensemble isn’t quite the same, as what happens at the Sports Festival contributes directly to the main story, but the contrast is potent. The general wackiness of this chapter makes the dramatic reveal of Orihara’s situation much more impactful.

As comedic as Hashikko Ensemble can be, I really don’t think this reveal is an absolute tonal shift for the manga. There’s a recurring theme of among the characters of trying to deal with the emotional and physical setbacks of their pasts, and it even creeps through in Jin’s vague descriptions about his relationship with his dad. Orihara’s story seems to be the most serious by far, and I have faith that it’ll be executed well. I mean, this is the guy who wrote Ogiue from Genshiken‘s story, after all. 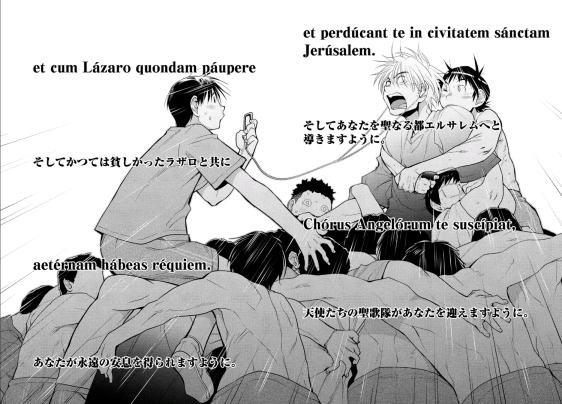 The exact circumstances of Orihara and his little brother’s abuse is kept vague. The manga mentions that his little brother was unable to move, and the arrival of the cops clearly implies that this was not the result of illness or accidental injury. It’s unclear if the abuse was primarily physical, emotional, sexual, or any combination, and I don’t have any hypotheses at this moment. More information will likely be revealed to us over time, but the degree to which Kio holds back will be interesting to see. Whatever the case might be, the chapter is a crucial piece of the puzzle that is Orihara. He’s not just a loner, and he’s not just temperamental—his past is complicated, and having him open up to others (let alone join a club) is going to be about understanding his issues.

Himari works hard to restore Orihara’s earphones, but I don’t get the sense that she’s doing this out of either sympathy for the guy, or out of a desire to uphold her end of the deal with Akira and Jin. She seems to me like someone who either values the technical skills needed or who has a sense of pride in her own abilities—like it’s a challenge she wants to overcome. Nothing says this more than her pantomiming the hand motions necessary to make the complicated earphone repairs. In that respect, she might make a good team with Jin, whose audio expertise potentially supplements her own strengths. His explanation of the complexities of noise-canceling earphones (like how you need to get through the urethane coating that’s meant to prevent short-circuits before you can even begin to fix them) is a perfect example in this regard.

What Orihara’s been listening to this whole time is Gabriel Fauré’s “Requiem Op.48: In Paradisum.” It’s used in Catholic church funerals, which probably means that Orihara’s little brother didn’t make it.

There’s a brief mention at the beginning that Hashimoto Technical High School switch to holding their Sports Festivals on weekdays because in the old days, delinquents from rival schools would come over to pick fights on the weekends. While the culture has changed since then, they keep the scheduling. Just having this little hint at the yesteryear of the high school (as well as the fact that the one older female teacher still remembers those days) gives this funny sense of history to the school setting of Hashikko Ensemble. 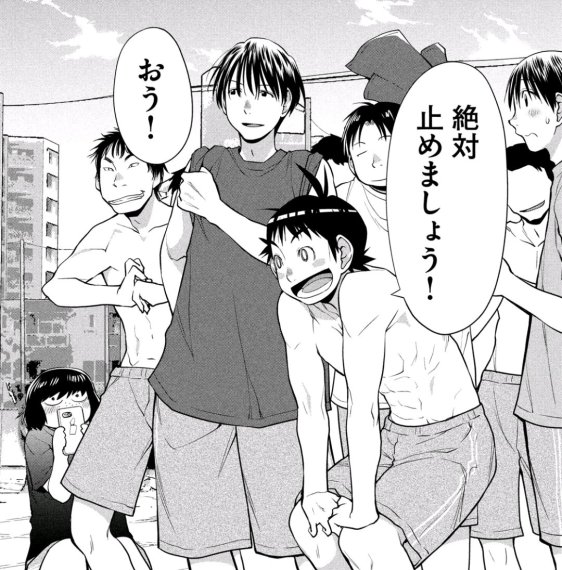 Also, Hasegawa is excellent as always. I can’t help but laugh every time I see her now.

One thought on “Life on Repeat: Hashikko Ensemble, Chapter 9”