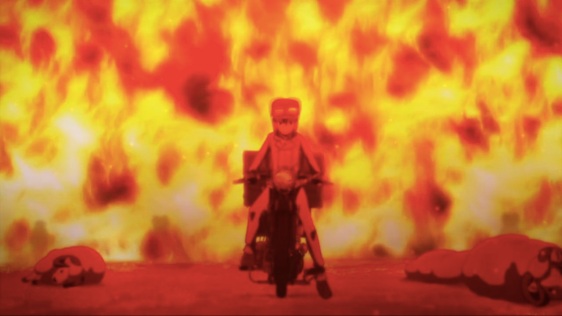 How do you end a series about observing humanity’s foibles with an action sequence involving a flock of angry sheep?

The answer is, “Who says it’s an ending?”

The 2017 anime of the light novel Kino’s Journey: The Beautiful World is garnering mixed reviews. This is partly because the series seems to be less focused on atmosphere and consistent theme compared to the 2003 version, despite them taking from more or less the same source material. One major point of contention with the newer series is its choice of final episode, adapting the story “Field of Sheep”—a story that borders on Schwarzenegger-in-Commando-esque antics featuring a ring of fire, driving through sheep in a jeep, and a dramatic lone gunman standoff with the woolly foes.

Because the anime clearly skips around chronologically from episode to episode, I decided to take a look at which episodes come from which chapters. Out of a currently 21-volume light novel series, most are taken from around volumes 7 through 9. “Field of Sheep” is by far the newest story, coming in as the final chapter of Volume 20. It’s likely even the latest chapter at the time the 2017 anime went into production.

It seems unusual to end a series on such an odd note, but that’s only within the context of the anime. Kino’s Journey rarely gets new adaptations. There’s the 2003 series, the 2017 one, and two films in 2005 and 2007 in between. It’s been 14 years between TV series and 10 years between animated versions. It’s possible that it’ll take another 10-15 years to get another one, perhaps leaving fans scratching their heads.

But for light novel readers, it can’t really be considered an end by any stretch of the imagination. Even though it’s the last part of Volume 20, the sheep story is yet another entry into the world of Kino’s Journey, which shows no signs of stopping. A new volume has come out pretty consistently (about once or twice a year) for the past 17 years. Volume 21 just came out in October of 2017. In other words, to the anime viewer, “Field of Sheep” is an unusual curtain call. To the light novel fan, it’s just another stop in Kino’s travels.

I have to wonder if the point of adapting that sheep episode last is just a way to say, “Read the light novel!” Except, it only works in Japan (or if you can read Japanese). For those abroad who rely on anime to get their Kino’s Journey, they’re left in an arguably baaaad situation.

Light novel anime adaptations get something of a bad rap, but there are plenty of gems in that sea. If I were to list all of the light novel anime I thought were good, I’d have a pretty hefty list—big enough that even I’m surprised by looking at it. Instead, I’ve narrowed it down to a few, with reasons why I enjoy them so much.

I’ve written at length on more than one occasion about why I think so highly about Youth Romantic Comedy, but every time I think about it I come back with even more reasons. This time around, an aspect that sticks out to me is how the series positions its central love triangle with a kind of thoughtfulness one might not expect.

Even though they all have significantly different perspectives on life, the characters’ contrasting viewpoints allow them to accomplish tasks that each of them alone could not. This extends to their love triangle. Where usually girls in these series are interested in the same guy for the same reason, Yui and Yukino are drawn to different qualities in Hachiman. Yui sees him as a good person deep down inside (whether he realizes it or not), and Yukino sees Hachiman as someone on a similar, socialization-shunning wavelength.

2. The Disappearance of Suzumiya Haruhi

In general, I’m pretty fond of the Suzumiya Haruhi anime, even if it’s not viewed with as much reverence as it once was. The story of a girl who might very well be god of the universe without realizing it hits a lot of interesting notes. However, I put the film The Disappearance of Suzumiya Haruhi on a whole other level. The powerful emotions swirling around the characters—especially Nagato—as well as the tough decisions they have to make, just sticks with me in a way that not even the series’ other high points can. The only significant flaw of the movie, in my opinion, is that it requires viewers to have all the background context of the series prior to watching, but I think it can still probably do fine stand-alone.

For more of my thoughts, check out my review.

I sometimes forget that this series is based on a light novel because of how witty its satire can be. Taking place in a world where humankind is no longer the dominant race on Earth—instead supplanted by a race of fairies—it often showcases the folly of humanity by having their mistakes repeated in fast-forward by the fairies, who are somehow brilliant and imbecilic at the same time. The fairies can easily fashion new and highly advanced forms of science and technology, but are extremely prone to group-think, bandwagoning, and lack of foresight. It’s all too fitting that we as a species would get outdone by more extreme versions of us.

This is another series I’ve written a review for, which you can find here.

If there’s one thing more recent light novel anime tend to lack, it’s a strong sense of atmosphere. Sure, they’ll have complex environments and elaborate magic systems, but they don’t capture the sense of a world in flux the way that Kino’s Journey does. Kino is a “traveler,” an unusual profession where she travels from one land to the next, learning about what each distinct culture is like. It’s a quiet and contemplative series, but at times can swell with tension and action. I’ve written a little about Kino’s Journey before, but only one of the short films.

While light novel anime are sometimes thought of as a more recent phenomenon due to the increased influx over the past 10-15 years, in my opinion the true grandmaster of the light novel adaptation is Slayers. Black magician Lina Inverse fancies herself a hero, but she’s more an agent of destruction, feared for her lack of concern for collateral damage. As she continues to make allies, she finds herself having to fight for the fate of her world, but not without keeping her characteristic wit, fury, and hungers both literal and metaphorical.

It was one of my gateway anime, and one of the first series that I was proud to own. Its mixture of humor, adventure, and dramatic development at the right moments makes it forever a classic in my mind. It’s one of the defining series of the 90s, and while its age often shows, I think it still has potential for wide appeal to a current audience.

As stated a while back, I finished watching Kino’s Journey, so I thought I’d lay down a few thoughts about it.

Kino’s Journey is the story of a girl named Kino, whose occupation is “Traveler.”  Being a Traveler entails going from country to country, exploring the world as a whole.  Kino is accompanied by her sentient motorcycle, a “Motorrad” named Hermes.

Kino’s Journey is loved by many, and after having watched it, I must agree that it is a wonderful series.  Each episode is more or less a self-contained story, one stop on Kino’s never-ending on-the-road life.  Each story has some basic metaphors for human thought, behavior, and philosophy, and are meant to show that there are many sides to any one situation.  It has a very slice-of-life feel to it, but unlike so many slice-of-life shows Kino’s Journey is not innocent.  No one is innocent in this world, and nowhere does this contrast stand out more than in the fact that Kino herself carries multiple firearms with which to defend herself.  And she’s a skilled marksman too.

The necessity of her guns alone goes a long way in explaining the central theme of the show: People are not beautiful, therefore they are.

This post is inspired by my recently having watched more of Kino’s Journey after a long delay of not-watching Kino’s Journey. Warning: Rambling ahead

I’ve realized how unusual it is that when I think of the term “Slice of Life,” my mind goes immediately to anime. It’s a genre I enjoy immensely, from Azuma Kiyohiko’s works to Haibane Renmei and beyond. You could even consider Genshiken to be “slice of life,” and much of Ogiue’s appeal comes from the small moments in her life. But then, why is it that “slice of life” is so associated with anime, instead of, for example, shows with live actors?

I’ve spoken to friends before about what it is that makes an anime feel like an anime, what differentiates it from other mediums, what makes us come back for more. I think in certain cases, it has to do with this sort of slice of life pacing that’s just not seen as often elsewhere. Of course, I’m not saying that all anime is slice of life, or that there are no slice of life shows outside of anime, but merely that there is a recurring trend that a good amount of people who like anime like it because of shows such as Haibane Renmei. Even if this genre of anime and manga doesn’t occur as often as I think it does, I don’t think anyone would fault me when I say that when it occurs, it leaves a big impression on its fans, perhaps more than even the most soulful of epic tales.

Slice of Life, what does it mean? It means, basically, a story where “normal” life occurs, with less focus on dramatic events and more on the day to day occurrences to which we can relate. I’ve spoken a bit about moe before, and I don’t want to turn this into a moe essay, but I can’t help but feel that there is a corollation between the two. When watching a slice of life show, one desires to live the life of the characters, what tends to be a slow-paced life where the characters involve simply enjoy each passing day. In moe, the appeal is in the “weakness” of characters, the raw, emotional side which is different from stopping and smelling the roses, but also invokes a feeling of realism. If slice of life is “I want to live how they live,” then I think moe is “I feel how she feels.” And of course, the two can co-exist and are often together.

I wonder, then, if animation, as shown through the aesthetics we associate with anime, lends itself to the slice of life genre, much like how moe is associated with anime and manga. Characters tend to be pure and beautiful (though not necessarily attractive). They exist as (seemingly) simple characters leading (relatively) simple lives, no matter what the circumstances. They generally consist of flat colors with minimal shading and black outlines. Due to budget constraints, animation tends to not be very fluid, so still images and animation shortcuts are used, which may lead to slower-paced shows (though that is sometimes called “filler”).  All this may lead to why “Slice of Life” as a genre has attracted so many people to anime.

Or maybe I should just talk to Scrubs fans more often.