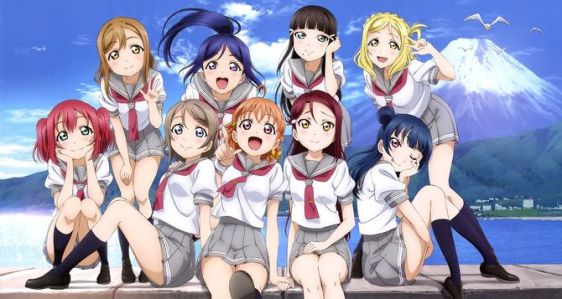 When I first watched the original Love Live! anime, I approached it with a healthy dose of skepticism. I may have enjoyed certain idol anime, but I’m not terribly fond of the concept of idols itself, and so premise alone isn’t enough. In the end, though, Love Live! won me over with a surprisingly solid presentation that emphasized both characters and narrative, along with what I found to be rather clever humor. Many months later, I now walk around with a Love Live! phone case.

So when Love Live! Sunshine!! was announced, and with it a set of new primary characters in the form of school idol group “Aqours,” it presented me with something of a conundrum. I’m now a fan of Love Live!, but I didn’t want to give the sequel a free pass. On the other hand, I also didn’t want to judge the series too harshly, scrutinizing it unfairly for not living up to the lofty heights of its predecessor. I still don’t know if I hit the right balance, but it was a situation I was consciously aware of.

Because the main way I experienced the first Love Live! was through its anime, I decided that this would be my entry point into Love Live! Sunshine!! as well. However, the Love Live! Sunshine!! itself didn’t make it easy. Character profiles came out months prior, each with detailed information and self-introductions. A trip to Japan and its otaku goods stores made it even clearer: pick your favorite, and devote yourself to her greatness. But I couldn’t! Descriptions alone are not enough to endear me to any character. I need to experience them interacting with each other. Otherwise, they become flat entities floating in a space of simple desire. That’s all well and good, but not how I decide who to root for.

Fate has ordained that I like Kurosawa Dia, but that decision can only truly be made once I watch the anime. pic.twitter.com/5QikUGIHC5

Nevertheless, from what little I gleaned (and with a nudge from fate thanks to a random shikishi signboard), I went into the show curious about two characters. The first was Kurosawa Dia, the student council president and someone who, according to her profile, revels in the idea of competition and achieving total domination in any endeavor. In a way, she has a very fighting game community-esque “play to win” mentality. The second was Ohara Mari, by virtue of being half-Italian American (thus making me imagine her talking like people I meet on the streets of New York City), and because she enjoys industrial metal.

Then the anime debuted. It was finally time to see how these characters behave when fleshed out and moving. But as the characters and their world opened up, and I got to see things like Watanabe You’s cute-but-odd obsession with uniforms and chuunibyou Tsushima (Yohane) Yoshiko’s antics, I noticed something. For both Dia and Mari, elements of their stated personalities existed, but the show only hinted at bits and pieces of it. Their “true selves” were, to a certain extent, hidden behind the plot. For example, while early on Dia shows that she secretly loves μ’s (the original girls of Love Live!) by basically acting as a fandom gatekeeper against main heroine Takami Chika, that love of victory doesn’t really shine through. There was no trace of Mari’s fondness for industrial metal, either. 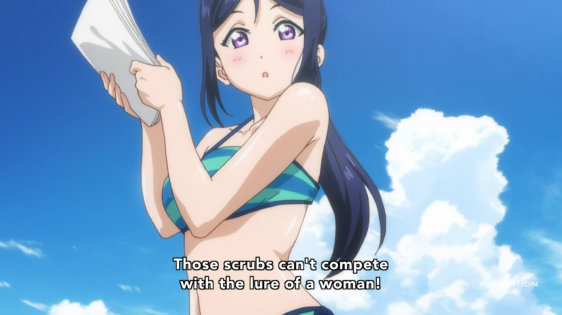 What I found was a disconnect between the initial profiles provided and the characters as they were presented in the anime, partially because the anime focuses on how the group came together in the first place, instead of having them already assembled as the official character descriptions assume. Granted, it was possible to see how that gap might get bridged, and it also created the opportunity to find new favorites within the anime (like athletic third-year and diver Matsuura Kanan!), but I had to wonder if I had sabotaged myself by just getting too much information, instead of sitting back and waiting for the anime. 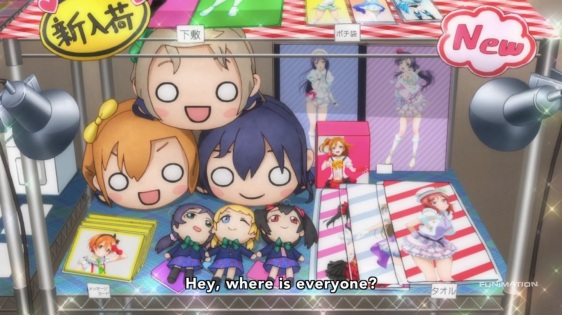 Another minor problem came with the fact that μ’s are essentially considered legends of the school idol world by the time of Love Live! Sunshine!! Their status is almost divine to many of the characters in the show, and while the story develops to show how the girls of Aqours embrace and then move forward from their love of μ’s, it also made me aware that, even as I am the biggest fan of Love Live! whole thing among my own circle of friends, my experience with Love Live! is not to the degree of its most ardent supporters. When I appeared on a podcast about Love Live! The School Idol Movie, my fellow guest Bamboo Dong talked about how she and others in the theater cried as the film reached its conclusion. People like them, the fans who are literally moved to tears, at seeing μ’s ride off into the sunset, are the ones who the girls of Love Live! Sunshine!! resemble. That isn’t me.

One of the results of these conflicts was that it became a bit more difficult to view the characters as being charmingly realistic, which is one of the qualities that drew me into Love Live! in the first place. At first, I thought their appeal lied in their being a little more extreme and bombastic. A lot of this feeling was extremely subjective, of course. You could ask anyone who’s watched both to say which characters they think feel more “real,” and you’d surely get disagreements even within a single franchise iteration. For me, it has to do with how characters resonate and reflect the life I see around me. Koizumi Hanayo is still the best, in part due to the fact that her enormous appetite and the way she can go from shy to intense when on the subject of her passions (rice and idols) is something I empathize with immensely. The divisive nature of Yazawa Nico comes from her being a little too real. I know someone who’s just like Sonoda Umi.

In spite of that mildly rocky start, and the fact that it is lacking in Hanayo, Love Live! Sunshine!! can count me as a fan. As the show progresses, you get to see Chika face the hurdle that is the dedication of competing school idols. You learn about the past that ties the third-year characters of Dia, Mari, and Kanan together. Friendships are challenged and made stronger, fun is had all around, and they for the most part end up as well-conceived characters who are each sure to attract people who love them to death. A cynical side of me could point to this being the franchise itself playing people like a fiddle, but I think the series makes a convincing enough presentation that even a discerning eye can become a fan of, say, Hanamaru’s speech quirks and “man out of a cave” experience with technology.

What perhaps impresses me the most about Love Live! Sunshine!! is how it handles the inevitable comparisons to the first series. In this regard, the ending of the first season of Love Live! Sunshine!! says it best. Much of the show is about Aqours trying to find its identity, its reason for being. While μ’s was conceived from Day 1 as a way to save their own school, and this eventually becomes a plot point in Love Live! Sunshine!! too, Chika is at first just all about being a μ’s fan. It’s not until the last concert in the final episode that the primary distinguishing feature of Aqours becomes clear, and it’s best to describe it in comparison to both μ’s and the original “boss characters” of the first Love Live! anime, A-RISE.

A-RISE was the #1 school idol group, and by the second season the reigning champions. They were dedicated to being the best they could possibly be, striving for the top and whatever heights lie beyond that. Saint Snow, Aqours’ own rivals, are of a similar mindset. μ’s was all about capturing the spirit of the zeitgeist of their time in high school as school idols, and letting such passion remain fleeting and thus all the stronger. Aqours, in contrast, is about showing love for their community, school idols as a means to share how great it is to live in a city with a fairly small population that is nevertheless full of good people.

Honoka and the other original Love Live! girls worked to save their school, but there was no need to show the appeal of the already-famous Akihabara. When Chika calls all of her classmates and everyone’s families to get near the stage and cheer for their climactic performance on-stage, it comes with the knowledge that doing so is against the rules. She literally sabotages her chances to progress in the Love Live! preliminaries because it is less important than getting the audience to see the great people who go to Uranohoshi High School and live in Numazu. Ironically, the actual “Love Live!” competition in Love Live! Sunshine!! takes a backseat.

My time with Love Live! Sunshine!! has been, while perhaps not an unusual one broadly speaking, somewhat strange compared to my other experiences with other anime and media franchises. Nevertheless, it’s definitely been worthwhile. Now that the pieces are in place and the girls of Love Live! Sunshine!! are all together, I’m looking forward to seeing Dia wreck some scrubs.

3 thoughts on “Media vs. Mix: A Journey Through Love Live! Sunshine!!”