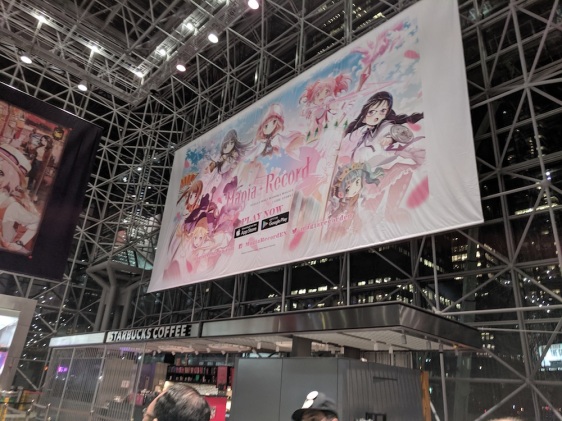 For the third year straight, Anime NYC 2019 has continued to fill a much-needed void as a New York Metropolitan-centric major anime and manga convention that is run by experienced professionals.

More of the Javits Center was taken up by the con compared to previous years, implying continued growth. While it’s not as large as New York Comic Con, and there’s a bit of an upper limit as to how many dedicated otaku are in the NYC area versus how many comics fans there are, I don’t mind the current balance. One of the strengths and weaknesses of NYCC is that it’s extremely broad and seems more like a general nerd multimedia convention than one dedicated to its core concept of comics and comics-related things. With Anime NYC, however, it still feels like an event dedicated to anime and manga fans fire and foremost. That alone is much appreciated. 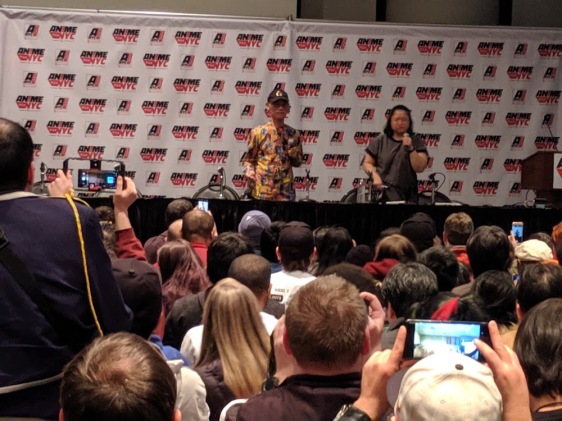 The guests this year were pretty much straight out of my dream list. Sadly, due to both personal obligations and just the sheer amount of overlapping content, I couldn’t even see everything I wanted to. On the fortunate side, however, I got to attend both the premiere of the first Gundam Reconguista in G film and a press Q&A with the tsundere master herself, Kugimiya Rie. You can check out Ogiue Maniax’s dedicated entries to both of those in the accompanying links.

Anime NYC 2019 went with a pre-show lottery system for getting autograph tickets as a way to prevent people from trying to line up at 3am in the morning and to give a fair chance to those who are coming from far away or don’t have the means or ability to get to the convention extra-early. Despite the fact that I didn’t get any autographs, I didn’t mind this system because it seems to be about as fair as it gets.

Alternately, some autographs could be obtained through purchasing specific products at the start of each day. There were also the $125 Kugimiya autographs that sold out in literally about five minutes, but Anime NYC 2019 was her first US appearance, so that was more or less expected.

That said, I’m not especially fond of the trend I’m seeing at Anime NYC where guests will only sign things from the shows they’re at the convention to promote. I understand why it happens, given that the guests coming want to make sure that the works they’re being advertised for get top billing, but these industry names often have such long CVs that it’s a shame when fans aren’t be able to express love for the particular things they feel closest to. For example, wanted to get autographs from Yukana and Kimura Takahiro, one of my favorite voice actors and character designers, respectively. But rather than being able to have my Pretty Cure and Gaogaigar signed, their autographs were tied to Code Geass—a series I don’t have quite as much affection for. Limiting what can be signed (aside from obvious things like “no bootleg merchandise”) is a direction I’d like to see conventions move away from in general, even more than paid autographs. 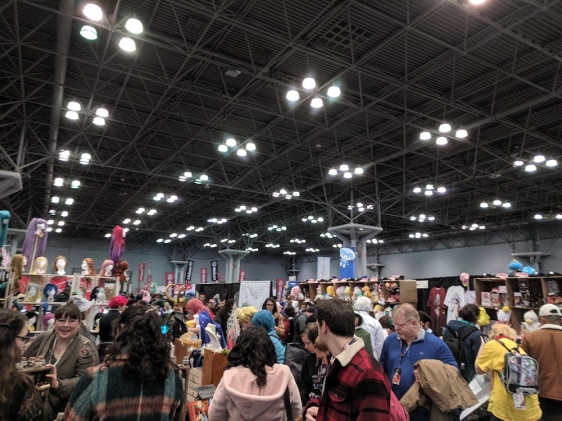 I did not end up buying much at the convention—a t-shirt here, a manga there—but from what I could tell, it was not especially difficult to navigate in terms of foot traffic. At times, it could be difficult to tell which row corresponded to what designated section, but it was manageable. They also placed the Artist Alley in the same space as the Exhibitor’s Hall this year, which meant the loss of the third-floor space but maybe more reliable crossover traffic for both the big companies and the small artists.

One new feature was a special food area in addition to the food trucks outside and the food court down in the bottom level. It was a great idea in principle, but the prices seemed a bit ridiculous even for convention standards. Go Go Curry (aka my favorite Japanese curry chain ever) was the star of the show, but the line was so constantly massive that I never had time to try their convention-exclusive fried-egg-on-gyudon curry. Here’s to hoping that it becomes a standard item on the Go Go Curry menu! 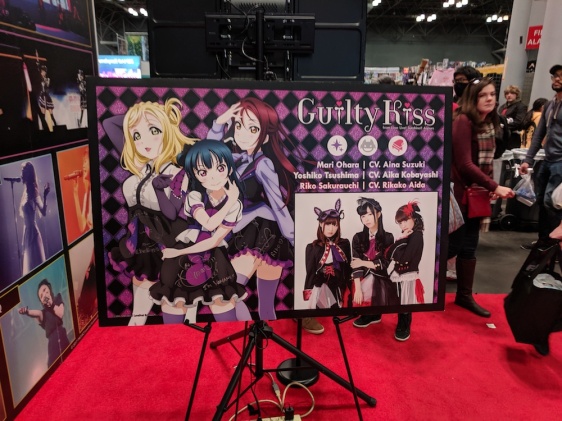 I was incredibly pumped to attend Lantis Matsuri at Anime NYC this year, as it had an impressive lineup of musical guests: JAM Project, Guilty Kiss from Love Live! Sunshine!!, TRUE, and Zaq. Months prior, I swooped in on a ticket as soon as they became available, and I’m glad that they eventually opened up more tickets for those who couldn’t get the initial ones. I wonder if they were hedging their bets, and trying to see if the demand would be there for more.

When it comes to attending anime music concerts, part of the fun is song familiarity and being able to enjoy your favorite themes live. But even for the less familiar tunes, Lantis Matsuri hit it out of the park. All the singers were fantastic, and really felt like they belonged on that stage. Guilty Kiss clearly had the largest fanbase there, and their hype was well deserved. I still have “New Romantic Sailors” stuck in my head. TRUE and Zaq ended with their best-known hits, “Dream Solister” from Sound! Euphonium and “Sparkling Daydream” from Love, Chunibyo & Other Delusions. It was not lost on the audience that these were both Kyoto Animation series themes.

Despite the stiff competition, however, JAM Project showed they they know how to steal a show There’s something about their energy that draws you in that outshines even the brightest stars. I have to wonder how someone completely unfamiliar with them felt about their performance. They led with One Punch Man to get the crowd to realize just exactly who they are, but they also made sure to include songs less widely known by the general audience. Of particular note is their blend of GONG and SKILL, which combined two of their best Super Robot Wars themes.

There were multiple collaborations throughout the concert, and one sticks out to me above all: JAM Project with Guilty Kiss doing the second opening from GARO. Before the concert began, someone near me was expressing their love of GARO, and seeing him scream wide-eyed as JAM Project announced that the next song was “Savior in the Dark” was a real highlight of the con.

My only complaint about the concert was that the audio was a little too loud. I was not sitting especially close to the speakers, but I could feel my ears ringing the next day. I also had this problem at the Gundam Reconguista in G showing, so I have to wonder if it was a convention-wide issue.

I thought Anime NYC 2019 was great, and I’m looking forward to next year. As the convention gets bigger, though, I hope it continues to properly straddle the line between big professional expo and intimate-feeling fan-oriented gathering. It might be an impossible task, but I still want that dream nevertheless.

Anime NYC 2019 is only two days away, and I want to use this opportunity to talk about how amazing the guests are this year. I promise that this is not a paid or sponsored endorsement in any way—these are my genuine feelings, and my feeling is that the guest list this year is just virtually perfect.

First and foremost, you have the legendary director of Mobile Suit Gundam, Ideon, and Zambot 3, Tomino Yoshiyuki. I saw him 10 years ago at New York Anime Festival 2009, and I am eager to see his return. He’ll be showing the first Gundam: Reconguista in G film, and as a staunch defender of that series, I’ve gotta go see it.

Then there’s Kimura Takahiro, animator and character designer on Gaogaigar, Godannar, Betterman, Brigadoon, and Code Geass. He is one of my favorite character designers ever, and I’m so, so stoked for him to be in New York.

Speaking of Code Geass, the voice actor Yukana will be making her New York City debut. In addition to playing C.C. in Code Geass (aka the best character in that series), she’s also Teletha Testarossa in Full Metal Panic!, Li Meiling in Cardcaptor Sakura, and Cure White in Futari wa Pretty Cure!

Megalo Box is an amazing anime and reinterpretation of Ashita no Joe, Moriyama Yo, and both the director and producer, Fujiyoshi Minako, will be attending.

And the Lantis Matsuri concert Friday night will feature both JAM Project and Guilty Kiss from Love Live! Sunshine!! Having now attended concerts for both groups, I’m pumped to see them again (and again and again in the future, hopefully). Nothing is as fantastic as JAM Project performing “SKILL,” and a part of me is sincerely hoping all the groups involved will join in for a rousing “WHOHhhHHoooHHHooOoooH.”

So see you all at Anime NYC, and I hope these guests get the star treatment they deserve.